The Sony Ericsson Xperia Ray was released in the UK at the end of August 2011, and having lived with it for over a month I thought it time to my thoughts out on this interesting device.


The size of this phone drew me in from the first time I saw it announced. Between 2007 to 2009 I had two Nokia 6300s, proper phone-sized phones, and at the time it seemed a compromise to move to the extra bulk and weight of the N79 to get the extra features. Fast forward four years and screen size is a upwardly spiralling trend, with the Xperia Ray being the antidote.


Some stats then. In the UK market there are only two Android phones that are lighter (Sony Ericsson's own X10 Mini and Mini), and only the Galaxy S2 is thinner. There are only three phones that can beat the 53mm width (again Sony Ericsson's X10 Mini and Mini, plus the X10 Mini Pro). Any one or two of those specs would be impressive, but all three means the Xperia Ray is a light, narrow and thin device, much like the phone-sized "feature phones" of 2007!

What Sony Ericsson have managed to do is make the phone small and light, without it feeling cheap or unsubstantial. The device has a slightly rubbered texture on the back making it easy to grip, and this combined with the glass on the front makes for a very solid and reassuring premium feel. The bezel surrounding the screen is very thin too, and has to be for the device to obtain it's narrow dimensions. I've really enjoyed having something that is so pocketable!


The 3.3" TFT screen has a resolution of 480 by 854, which works out at a very impressive 297 PPI (pixels per inch). The colours and contrast are very impressive too, and along with the high PPI make for a very clear, crisp and high quality viewing experience. The device has Sony Ericsson's "Reality Display with Mobile BRAVIA Engine" which accounts for some of this excellent colour reproduction and even great outdoor performance, if you're happy with a 3.3" screen of course. I've already commented that I like smaller phones, but with the Galaxy S2 and Sensation at 4.3" and the upcoming Galaxy Nexus at 4.65" it seems bigger is seen as better right now, so Xperia Ray would be seen as inferior and a step down in that respect. 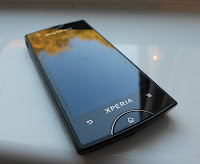 The Xperia Ray shipped with 2.3.3 version of Gingerbread. Sony Ericsson have really upped their game on the Android front, having admitted they made mistakes and underestimated the demand of users wanting the latest versions of Android, and wanting them pretty quickly. All of Sony Ericsson's Android phones this year, starting with the Xperia Play in Spring, have come out with 2.3 Gingerbread, and SE have already confirmed that all this year's Xperia range will get updated to 4.0 Ice Cream Sandwich.


Staying up-to-date with current version of Android will win Sony Ericsson a lot of friends, especially compared to some other manufacturers' efforts, but also this year they announced they would allow users to unlock the bootloaders on their devices by first following a couple of steps on their website and then following steps for the Android fastboot utility.


Sony Ericsson also provided devices and knowledge transfer to Android community FreeXperia to expedite the development of highly popular custom ROM CyanogenMod for the Xperia devices, and sure enough, when CM7.1 was released the Ray was in the supported devices list along with the Arc, Play, Neo and others. I plan on moving to the CM7.1 ROM in the near future, once I'm finished writing this up in fact!


Returning to the Sony Ericsson's stock ROM, the customisations on top of Android are lightweight compared to Sense and TouchWiz. They didn't see fit to include the four-corner app launchers seen on the Mini and Mini Pro devices, but their usual app drawer is present, being pretty inoffensive and offering the choice to order apps alphabetically, by last installed, your own custom order, and by most used. There's a lot of Facebook integration in the Xperia Ray, and once you connect your account you'll find your Facebook friend's popping up into your contacts, Facebook events and friend's birthdays popping up your calendar, and your Facebook photos appearing in the gallery app, comments and all!


The five home screens come loaded with some Sony Ericsson widgets for standard functions like toggling services, viewing weather, music play controls, gallery and Timescape, the last two of which are scrollable to go through your history of photos and messaging and social media respectively. They're nice enough widgets, but don't work well on such a small screen. And remember, if you don't like the launcher or the widgets, you can just choose some different ones, and that's why we love Android!


I've already mentioned that Sony Ericsson have done a great job of making a light phone feel substantial, and they also ship the Ray with a screen protector on the device in the box. This is applied to the device with perfect alignment and zero bubbles, much better than any human could apply it! There are also a couple more protectors in the box should you need to replace the first one, a nice touch.


The home button has a nice amount of travel, and feels like it hinges rather than pushing down uni-formally. Surrounding the home button is a multi-coloured notification LED, which shows battery status (red when running low), charging status and of course notifications for calls, SMS, email and any other app that has notifications configured. It lights up with a white colour for a couple of seconds after pushing the home button, however, none of the home button and the capacitive back and menu buttons' icons are backlit. This can be pretty annoying in dark conditions, although after a few days I got used to the buttons' locations, but it seems like a cost-cutting exercise or maybe helped to keep the device so thin.


The first of two big gripes with the camera is the the lack of physical shutter button. It can only be as part of cost-cutting and potentially keeping the device smaller that it has been omitted, which is a shame as Sony Ericsson are marketing this device as having a great camera even in low light conditions. Even the people in that promo video look like they would be more comfortable with a proper button instead of poking at the screen to take a picture! Fortunately Sony Ericsson did include the next-best-thing in that the camera app allows you to focus your shot by holding your finger against the touch screen, then re-framing if necessary, and only taking the shot when you release the touch screen.


The second gripe is that there is no "flash" mode for the LED light that accompanies the camera unit, it is simply a "light" that has to be fully turned on for the duration of framing and taking a photo in dark conditions. It seems none of the third party camera apps can alter this behaviour either unfortunately.

Having said that, the 8.1 megapixel camera performs fairly well, having one of Sony Ericsson's Exmor R sensors , as previously used in the Xperia Arc. They tout the Exmor R sensors as having great performance in low-light conditions, but I wasn't overly impressed. The video camera records 720p resolution at 30fps and the quality of the output is very nice, more impressive than stills in fact. There's also a VGA front-facing camera for self portraits at questionable quality and more likely video calling, with Skype working very well despite the Xperia Ray not currently being on the video calling compatibility list.


There are a couple of media based apps included by Sony Ericsson, like TrackID for recognising music albeit slightly less comprehensively than Shazam or SoundHound, and Connected Devices, which lets any DLNA-compatible players on your WiFi network play media from your phone, and it works very well.


Local playback of music through the speakers is better than most phones, and has a very good maximum volume, whilst missing some of the lower frequencies. Video playback on the phone is very good too, again owing performance to the Mobile BRAVIA Engine. However, if you're planning on watching much more than a couple of minutes of YouTube on the 3.3" then you need help.


Along with the camera non-flash and lack of shutter button, another big pain point with the Xperia Ray has been battery life. There had been many other reports of poor battery life which I found surprising as I'd been getting through a whole day fine, and more to the point this should be expected with the small screen. I don't think many people have ever made it more than a day and a half on one full charge on any Android handset, but with a smaller screen to power and a decent 1500mAh battery I thought this might be one to get into two days per charge.


However, whilst I was getting a full day for the first couple of weeks, I now find myself running out of battery in the evening, with very little usage, sat at home a few metres from the WiFi access point, screen timeout on one minute, so nothing out of the ordinary. I have hopes that Sony Ercisson's Android 2.3.4 update will improve this, or maybe the CM7.1 ROM will eek more life out, so I'll have to report on that at a later date.


The wrap-up is fairly easy here, as most smartphone enthusiasts won't be able to see past the small screen size, and maybe even won't look at anything that doesn't have a dual core CPU. Everyone else not concerned with massive screens and other spec wars will see a really nice looking, nice feeling phone that has Android from Sony Ericsson, a company they'll have no doubt heard of. So for that reason, coupled with the low priced contracts it's available on, I could see this shipping a lot of units.


I am, as usual, in the middle somewhere. I don't care about dual core CPUs, HDMI ports, and actively dislike large sized phones, driven by large screens. If Sony Ericsson could have only included a camera shutter button, made the flash bulb operate properly, and sorted the battery life then maybe I wouldn't still be looking for my next phone. Again. 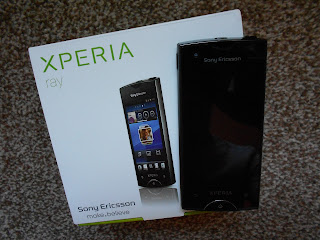 Posted by Jamoi Holland at 15:38 No comments: