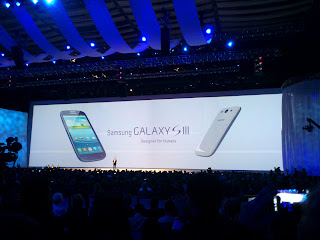 I was lucky enough to get into the Samsung Mobile Unpacked event tonight, following a tip-off from Steve Litchfield, for the unveiling of the Galaxy S3. There was the standard kitsch presentation with lots of over-the-top “design around humans” type statements, but the main win was getting some hands on time with the device ahead of its European release on 29th May.

Steve had come prepared with the Galaxy Nexus, and straight away you could see the striking similarities in outwards appearance. Versus the more straight edged appearance of the S2, the S3 sports rounded contours around its entire exterior, design to “fit the human hand”, something ever so slightly borrowed from Sony Ericsson some 2 years ago. The two phones are as good as the same size, and pretty similar to the S2, although Samsung have done a good job at squeezing in a 2100 mAh battery whilst keeping the thickness down under 9mm. Truth be told there weren’t any massive advances in the hardware here. That’s not to say the overall package isn’t great, because it is! The camera seemed much better than the lacklustre performance from the Galaxy Nexus, although borrowing its quick camera app load-time and rapid fire shooting, including a “best photo” feature that fires 8 rapid stills and attempts to pick the best on for you. The 720P 4.8” screen, Super Amoled, looks the same as the Galaxy Nexus’ and probably would shade just under the HTC One X (and yes, if you care, it is PenTile). The exterior casing is in reality Samsung’s usual plastic that doesn’t feel like “just plastic”, although they bucked a recent trend with both a microSD card slot and a removable battery! There are accessories to boot, including wireless charging dock (lovingly borrowed from Palm), HDMI adaptor, desktop and car docks. 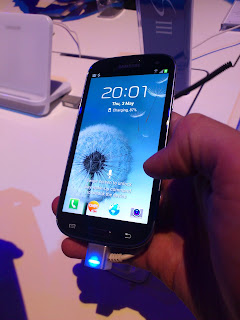 Samsung have however mad a real effort in the software department, adding several features above and beyond stock Android. Under the collective banner of Touchwiz Nature UX, you’ll find such things as:
• S Voice which is basically an imitation of Siri
• S Beam which is their version of stock Android Beam from ICS
• Wake Unlock Actions to wake and unlock the phone with voice commands
• Raise the phone to your head whilst reading an SMS from a contact to start dialling them
• Face tagging in photos, with auto sharing to the recognised contacts
• Pop up play, allowing you to leave video playing on top of the rest of the OS

There are more features of course, and this isn’t intended as a full review or even preview! However Samsung have been very busy in the software department, which adds weight to many commentators’ opinions that hardware specs for smartphones are beginning to plateau, with software potentially being the new differentiator. Many criticise the Android OEMs for trying to build their own brand loyalty through skins, frameworks and UIs, even more so as traditionally these company’s expertise lie in hardware not software development, shown up in the early Android incarnations of Sense, TouchWiz, UXP et al. 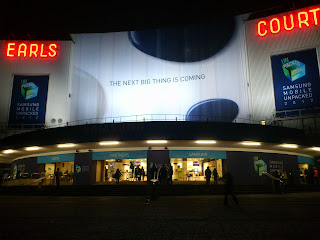 My gut feel at the end of it all was similar to when the Nexus S came out, and was branded the culmination of this year’s smartphone technology, as opposed to setting out a stall for this year’s new technology. The camera hardware isn’t new, although it borrows some nice speed features from the Galaxy Nexus. Curved design borrowed from Sony Ericsson. Wireless charging borrowed from Palm. S Voice borrowed from Apple’s Siri. The comparatively large battery is welcome though, and for our shores should cope well with 3G radios, with the LTE version faring less of course!
Posted by Jamoi Holland at 00:16 1 comment: