At the time of writing my full-time device, for work and play combined, is a Moto G. There's nothing much to tempt me away at present, given my usual caveats about "phone-sized phones" and wanting decent value for money. My better half dropped her old Nexus 4, several times, until the digitiser finally gave up and she inherited my unloved Z1 Compact. Whilst I wait for my next phone to be announced (Moto X2? Moto G2?) I decided to refurbish the Nexus 4 myself, and here's how it went...

I had nothing to loose. The back had been cracked and smashed for a while before the final accident which took out the screen glass and digitiser, leaving the touch screen completely dead. The phone was as good as useless, so I couldn't really make it less functional with my average DIY skills! 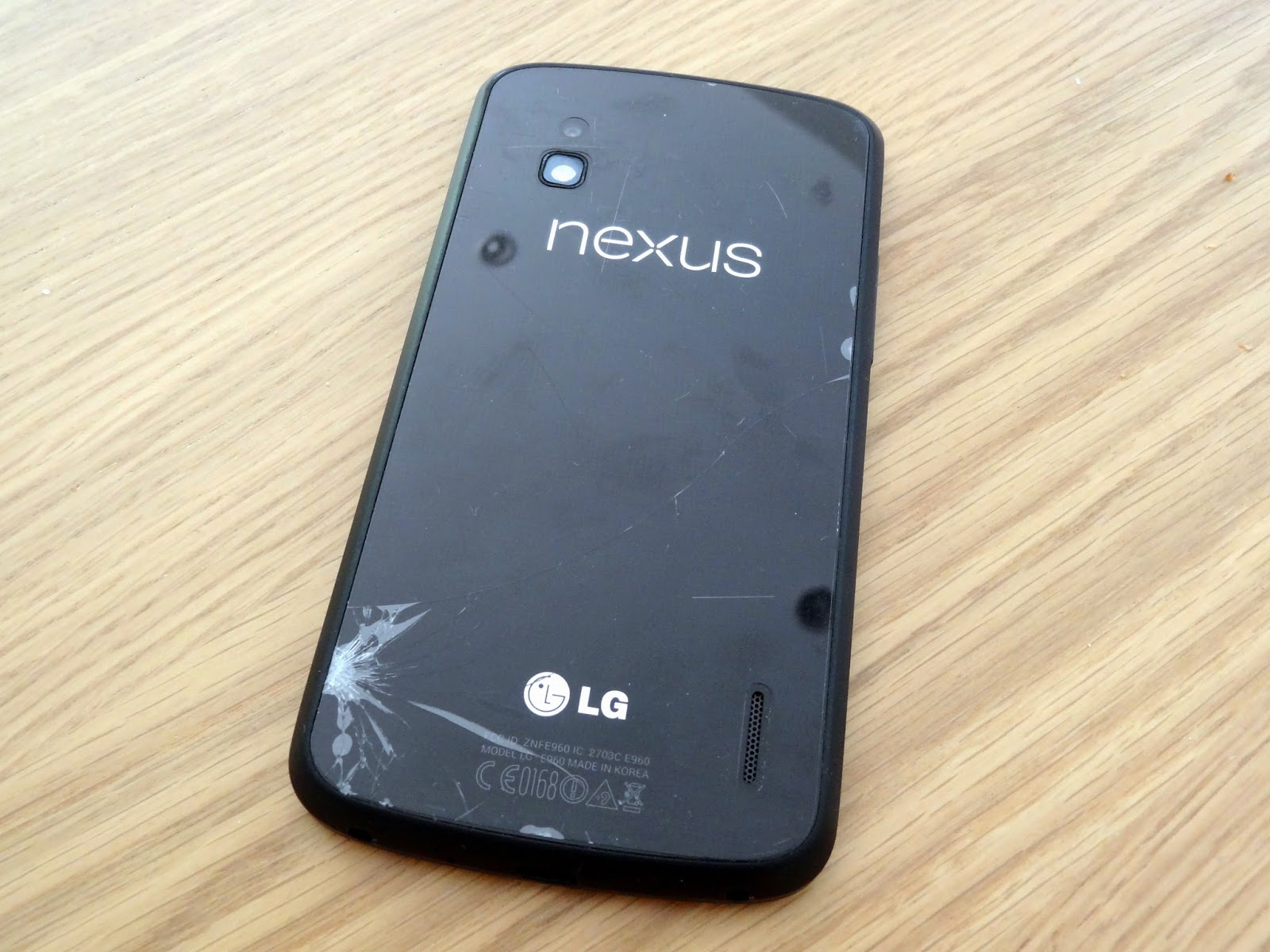 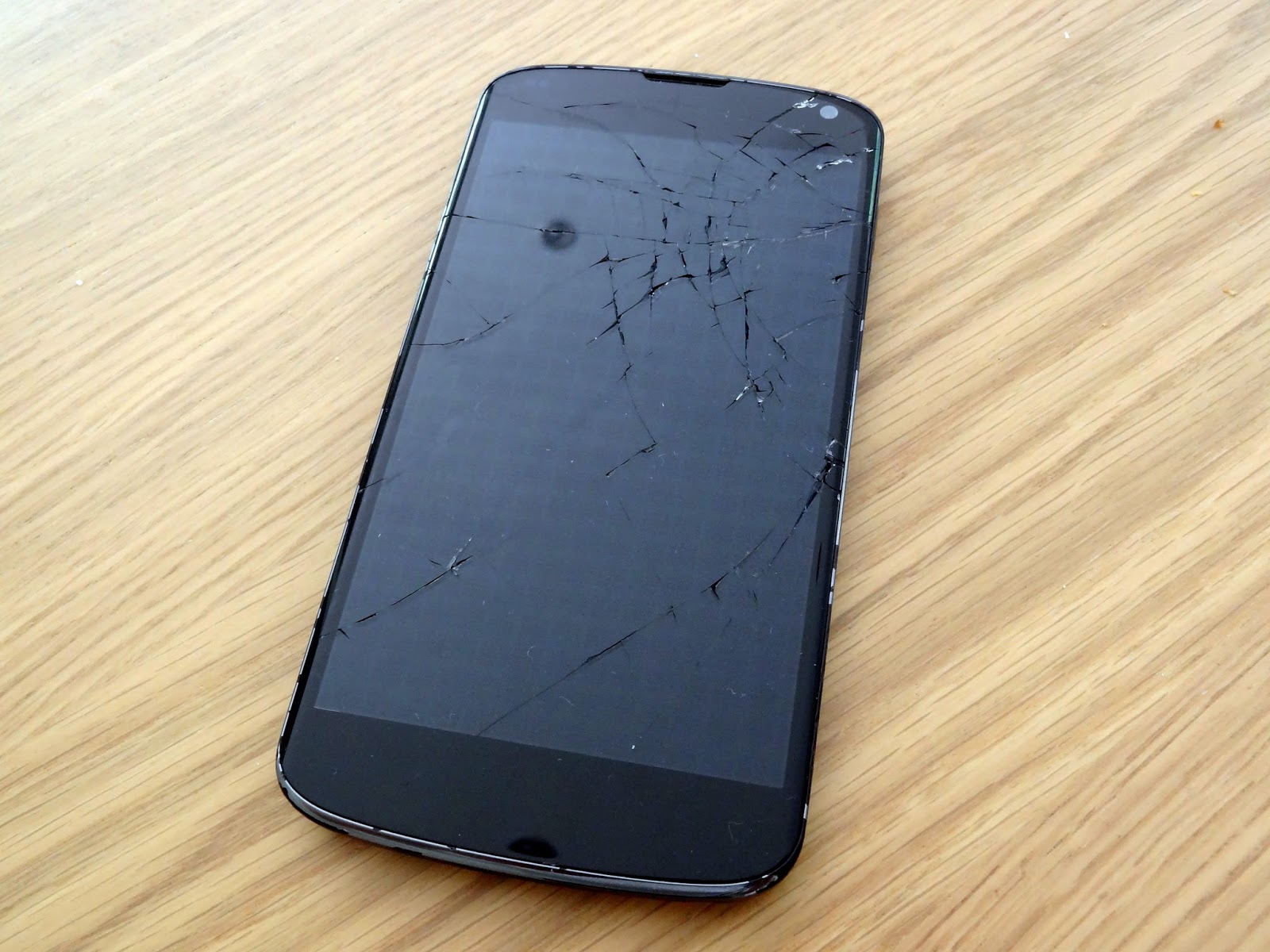 For less than £40 I was able to source a replacement screen/digitiser unit and a back glass panel from eBay. I opted for just the glass panel for fixing the back of the Nexus 4, although you can get the whole back case unit including (or excluding if you wish) the coils for wireless charging and NFC.

The screen/digitiser unit included a set of "handy tools". The Torx screwdriver was actually too small, so I ended up using my own. 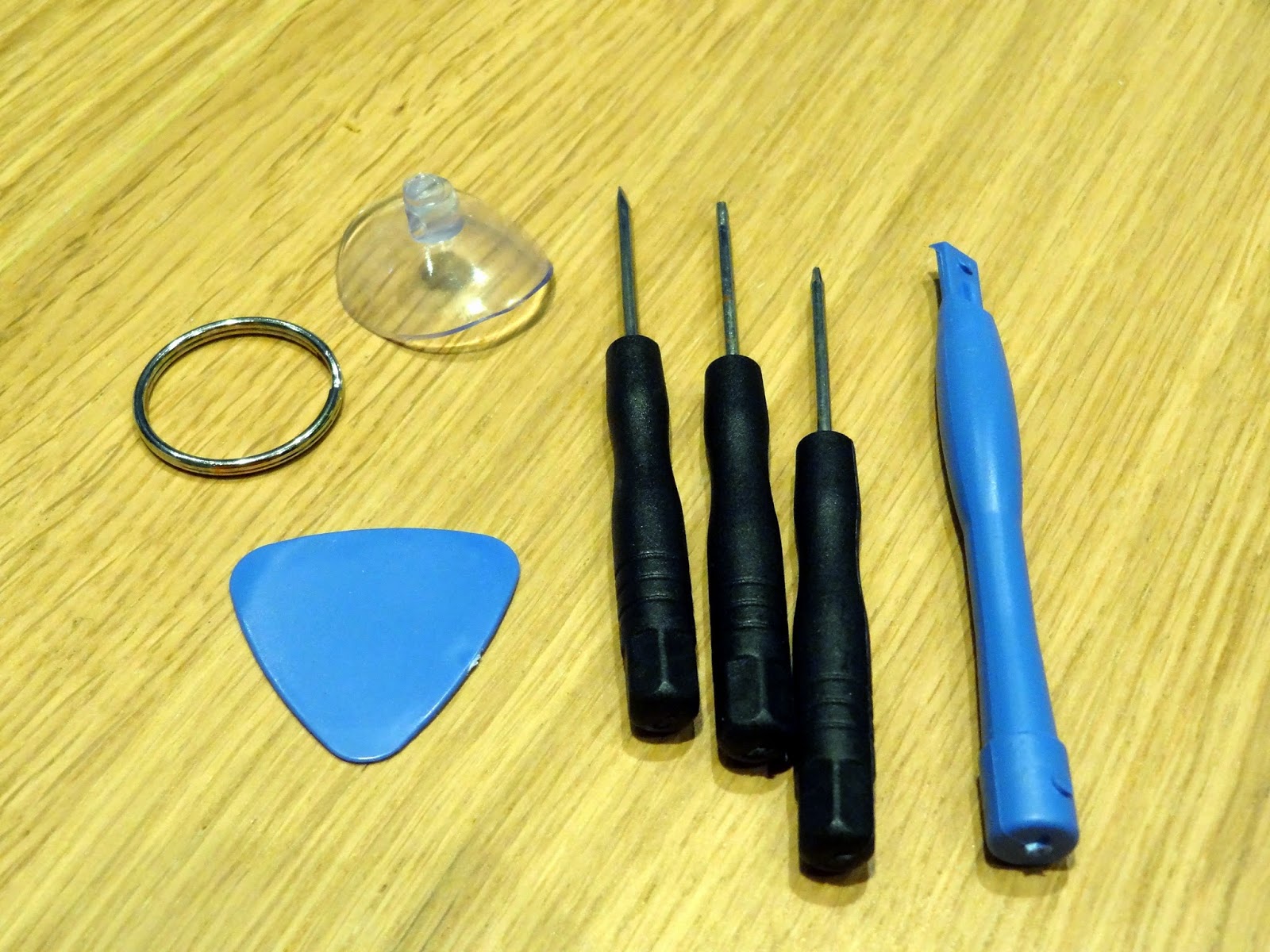 The back cover is mostly cosmetic on the Nexus 4, so I opted to start with the more important screen/digitiser. A couple of Torx screws and some levering with the plastic tools and the back cover popped off. A further 11 or 12 small Philips screws later and the battery and plastic motherboard covers were free and removed. The battery in particular was held in place with strong adhesive, this took some encouragement to release from the case! 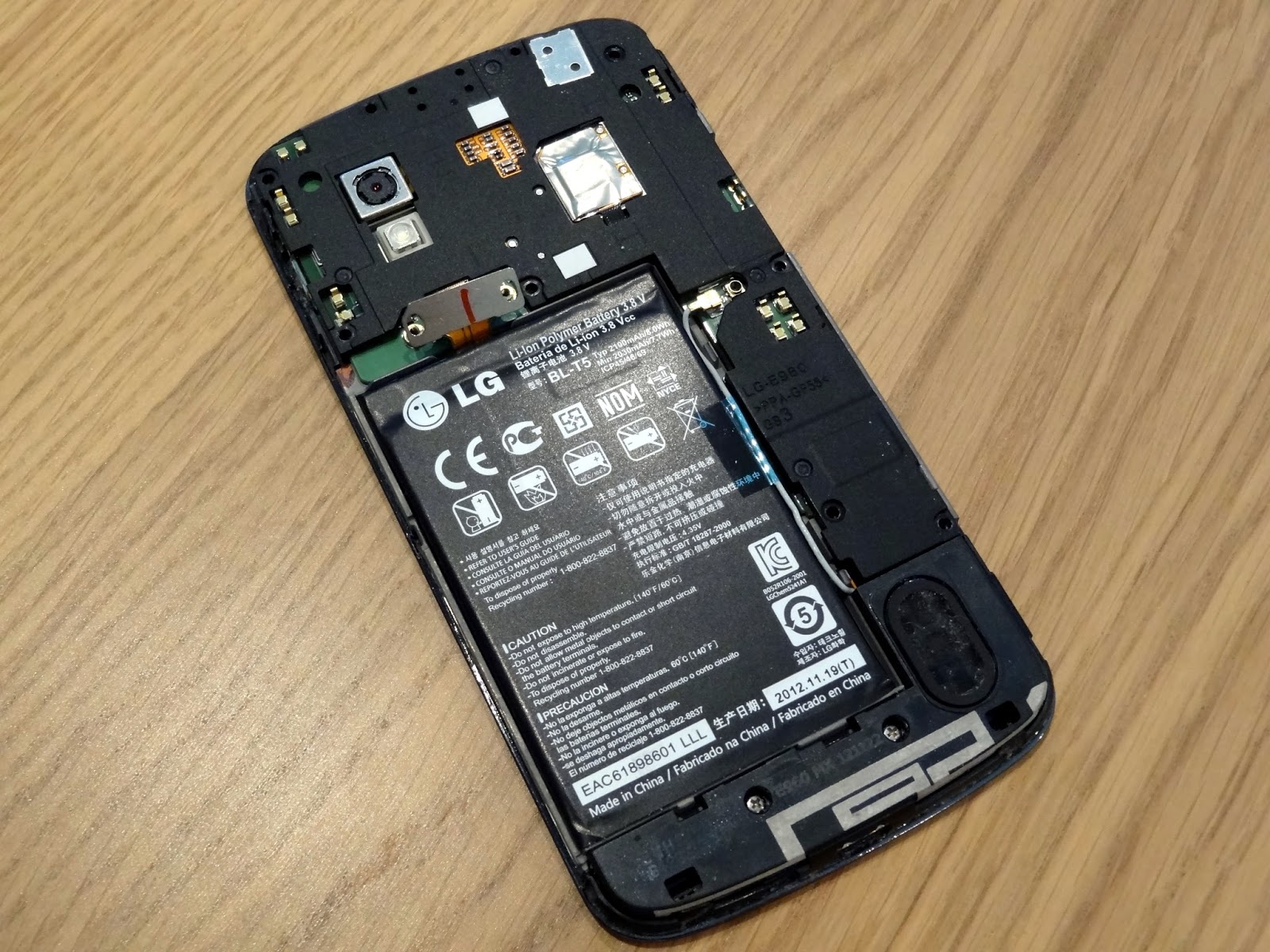 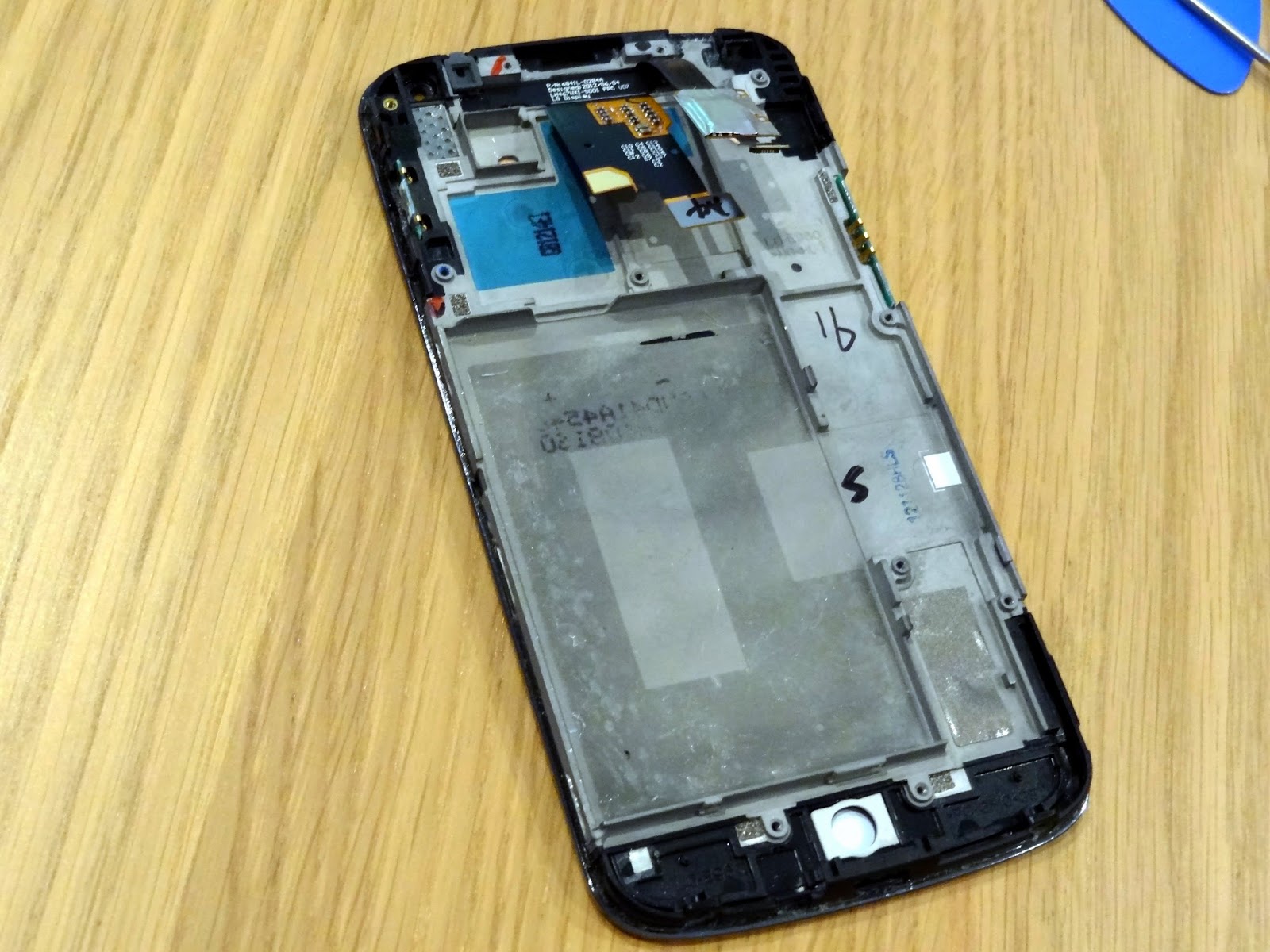 The links between the motherboard, daughter-board and other components like the rear-facing camera and 3.5mm jack were next to be disconnected, then each of those parts were removed from the device. Knowing I had to put this bunch of parts back together once the screen was replaced, I scored geek points by numbering the components as I pulled them out, making re-assembly much easier. 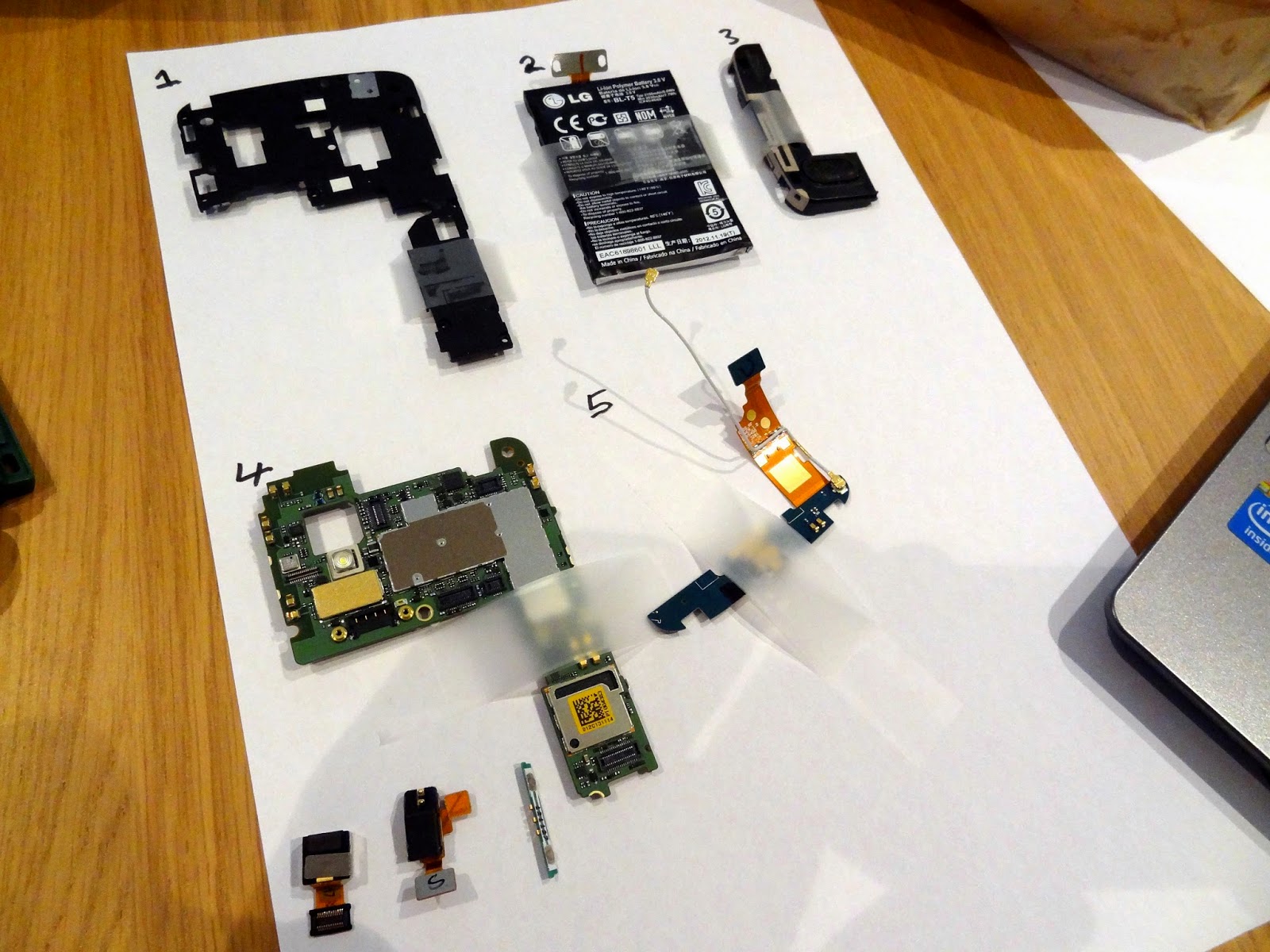 At this point "the device" was was just a screen/digitiser and some side buttons! This matched (almost) the state of the screen/digitiser unit I had been supplied. The compare and contrast was interesting, as the numbers of the parts didn't totally match from the original. I wasn't surprised, this would most likely be the evolution of the manufacturing process during the time the Nexus 4 was being manufactured, leading to different part numbers along the way. 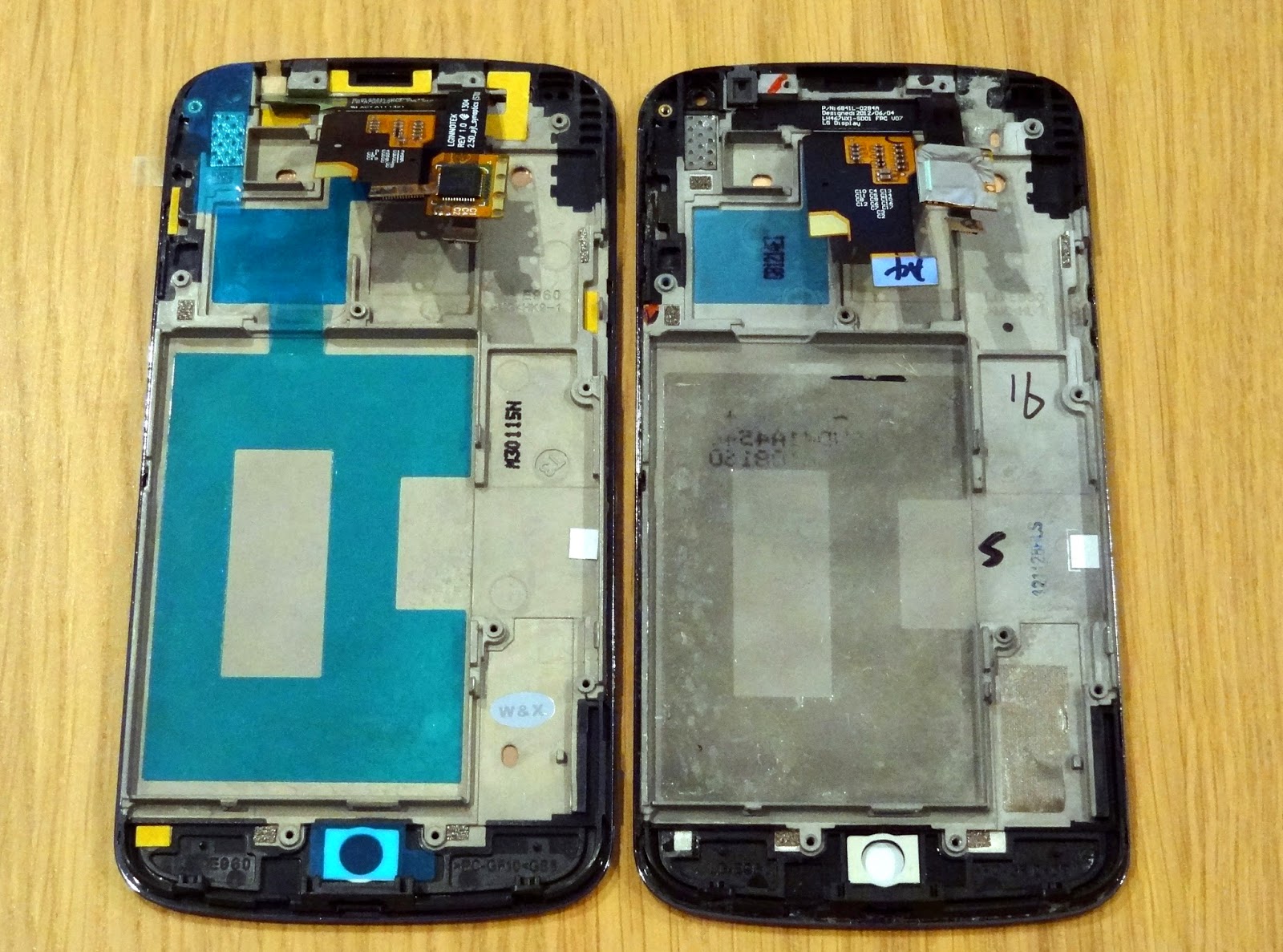 One genuine omission on the new screen/digitiser unit was a diffuser which should sit in front of the notification LED. On the left the original clearly has a white diffusing layer, which is actually secured between the screen and the casing. On the right, there is no diffusing layer, you can see straight through to the black outer casing, which is almost transparent when any amount of light is present. I added my own diffusing layer, made crudely from printer paper, but it seems to have done the job!

Re-assembly then began, starting with the side buttons, the camera, the 3.5mm jack, the daughter-board, the main motherboard, the plastic motherboard covers and the battery. I had a scary moment when the device didn't power up after re-assembly, but a few minutes on charge from a wall socket subsequently revealed the battery was flat. In hindsight this makes sense; with touch input not working, I was unable to actually turn off the Nexus 4 in its broken state, so I most likely left it in a corner somewhere where it would have drained entirely! 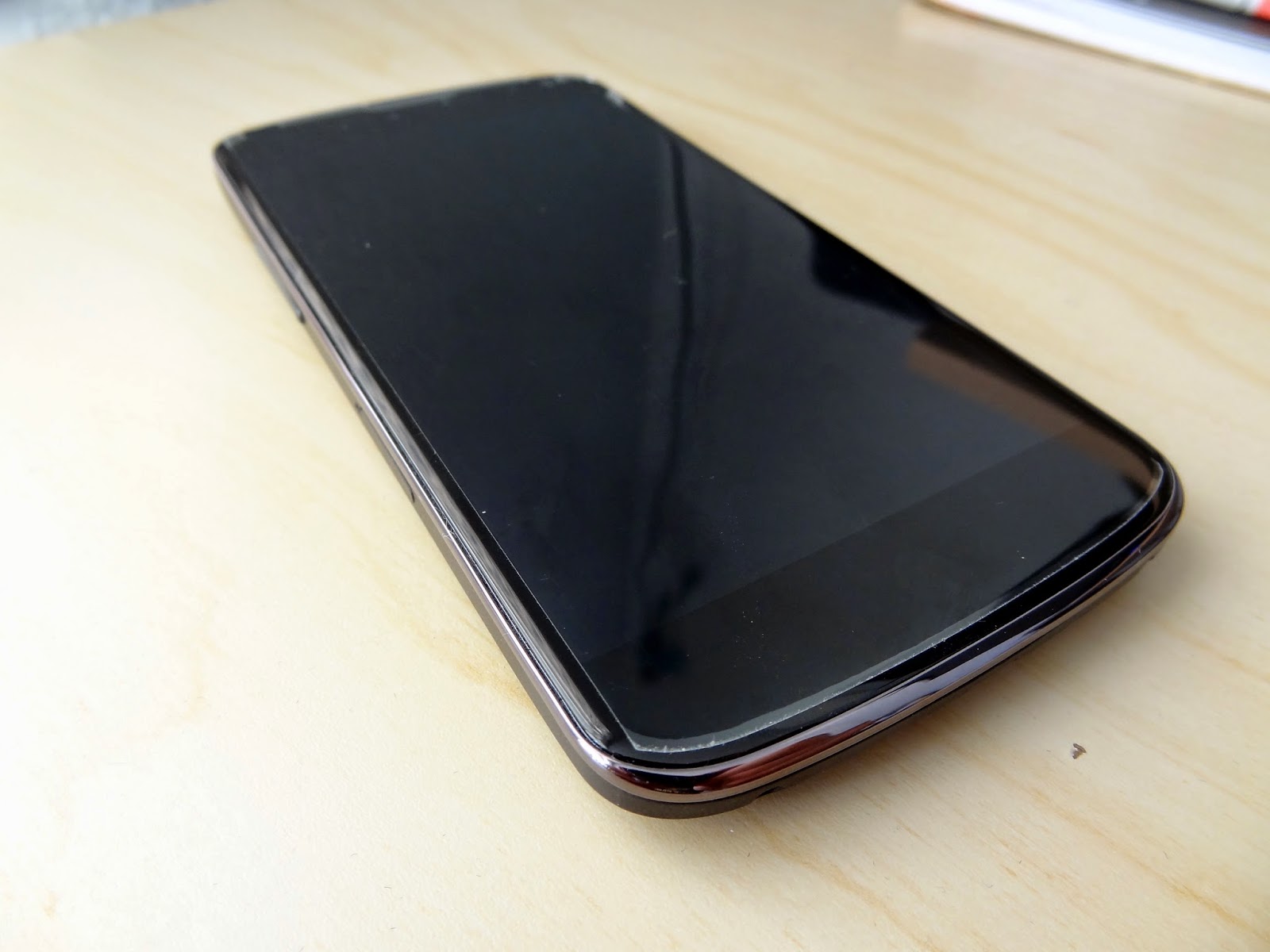 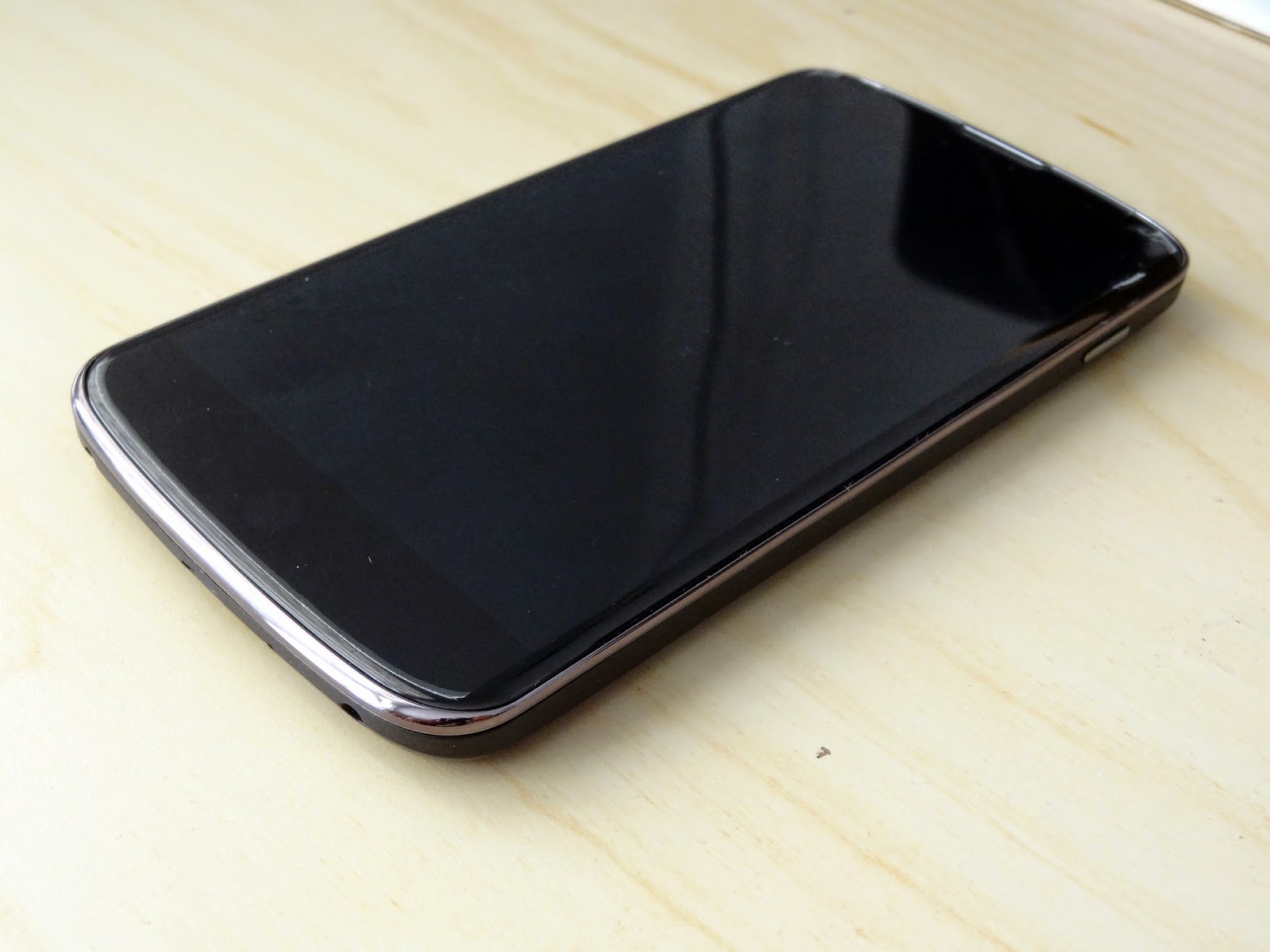 With the screen/digitiser replaced, I started work on the back cover. Having gone for the cheaper option of purchasing just the glass panel and not the entire casing unit, I had to remove the old glass panel fro the plastic outer case. The glass was already shattered in one corner, so starting there I began to pull apart and pick out the shards of glass. The NFC/wireless charging coils made this job trickier; they are on effectively a gold sticker, pressed onto the inside of the back cover. I had to peel this off the old back cover with some force due to the strong adhesive, but not so much force as to break or tear the coils! 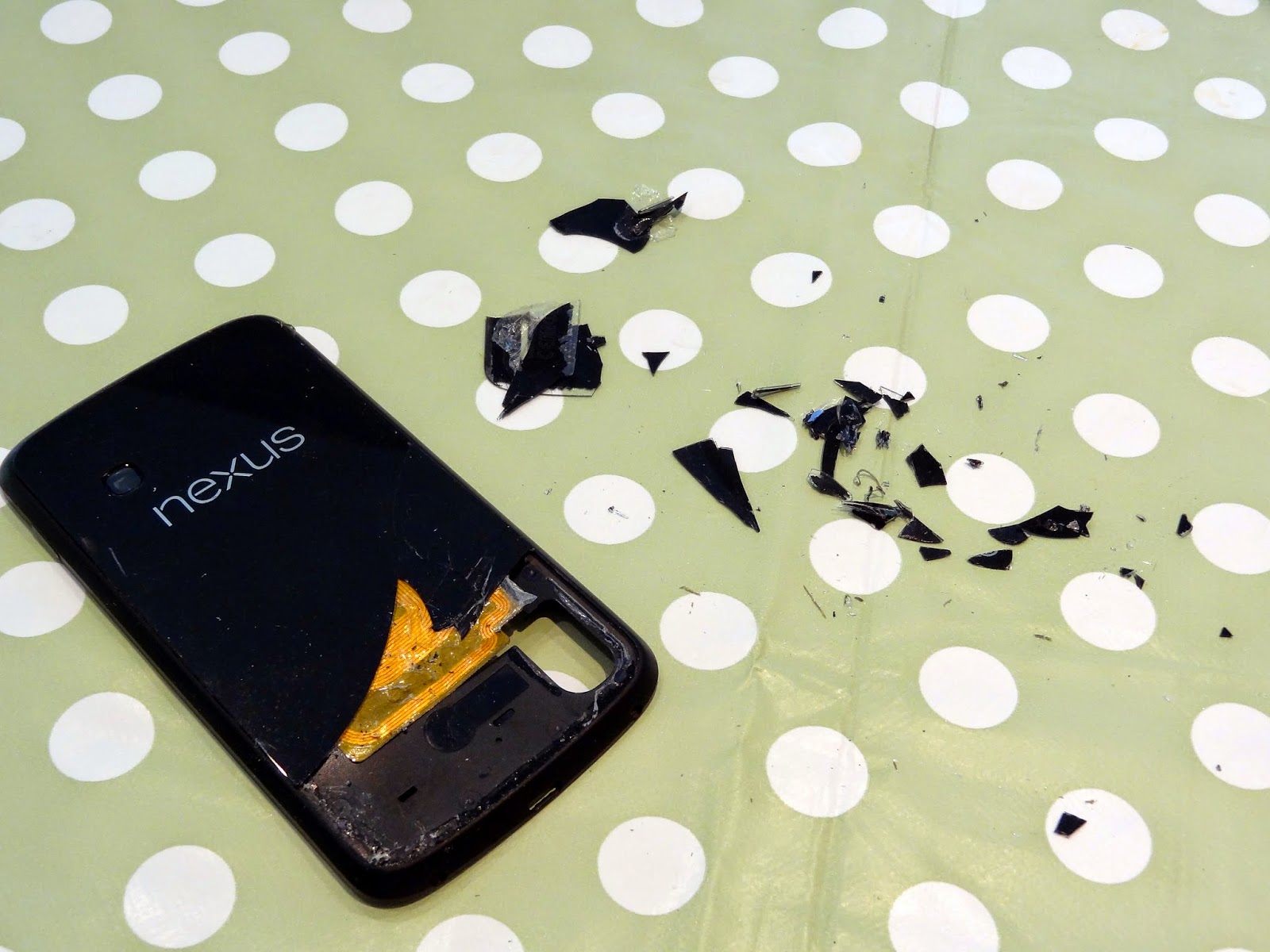 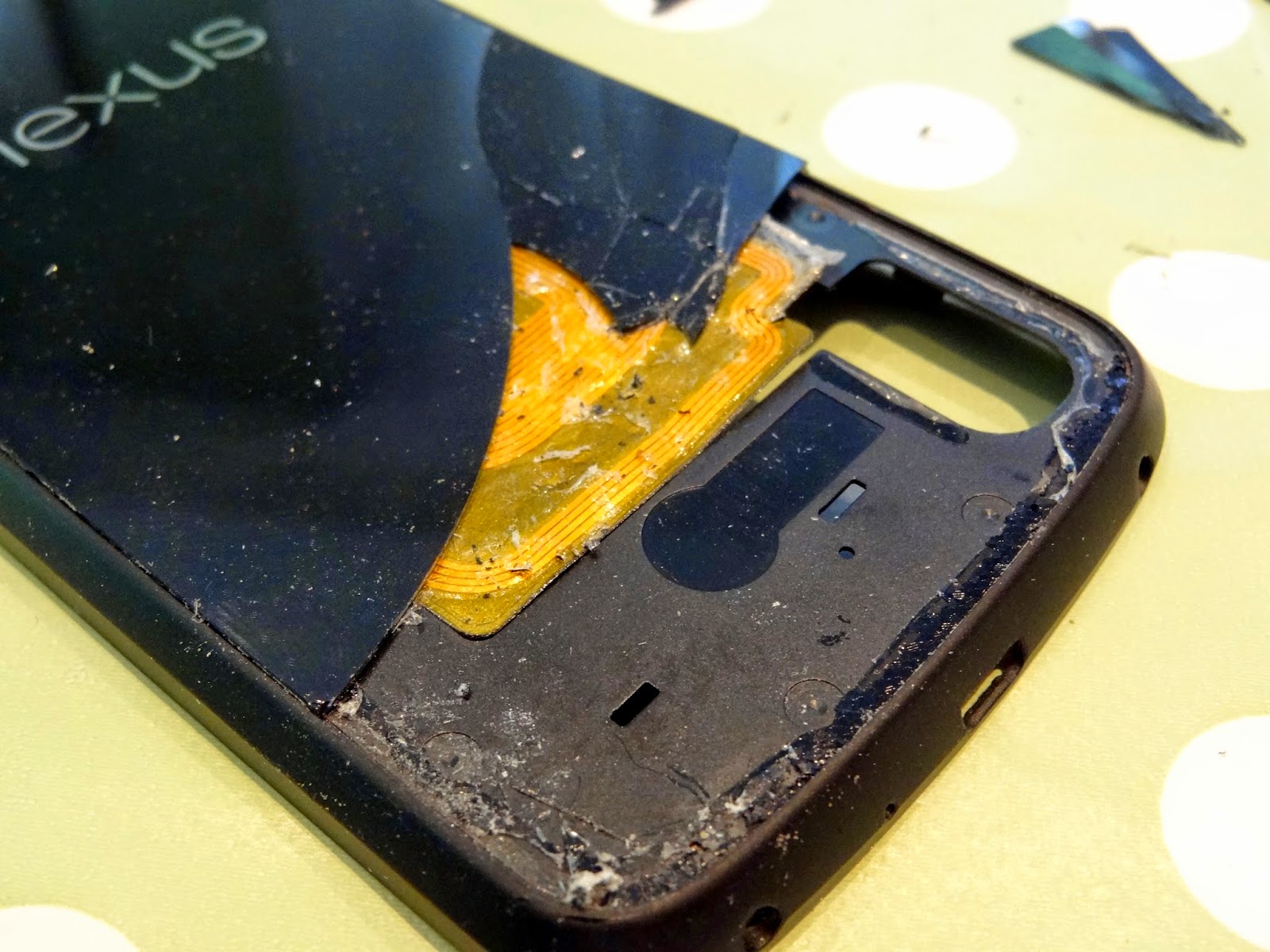 The plastic table cloth was very useful, as at the end of this glass work I was able to round up and dispose of the large amount of small pieces of glass, not the kind of stuff you want to be on your kitchen floor when you're walking in barefoot to get your breakfast in the morning! 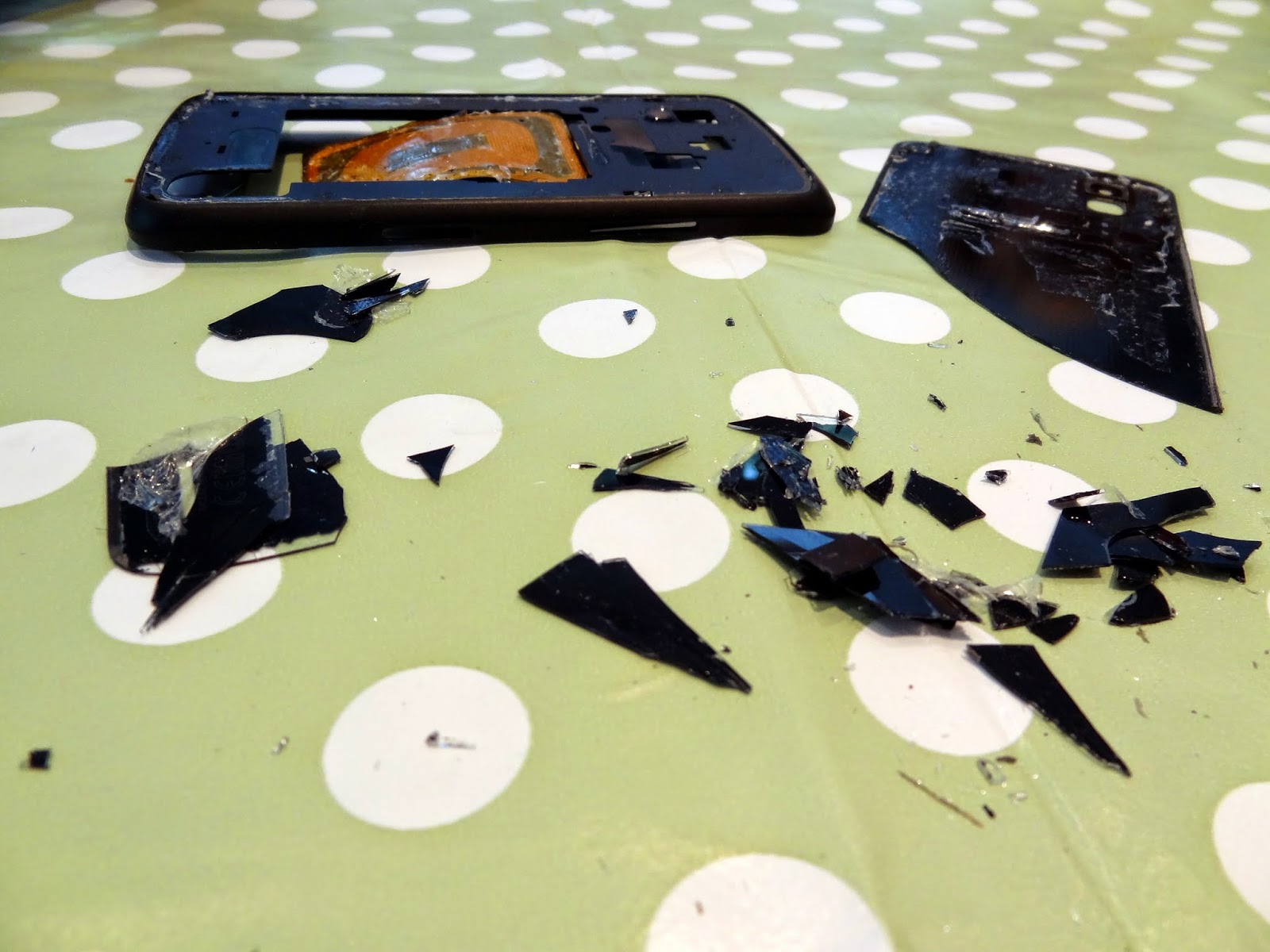 Having picked out all the glass pieces, the back cover was free of its original panel. Almost. There were still many bits and pieces of glass and other dust and grime, which would need to be removed to ensure a good adhesion with the new panel. Some rubbing/cleaning alcohol and cotton buds did the trick to clean up the plastic case ready for the new panel. 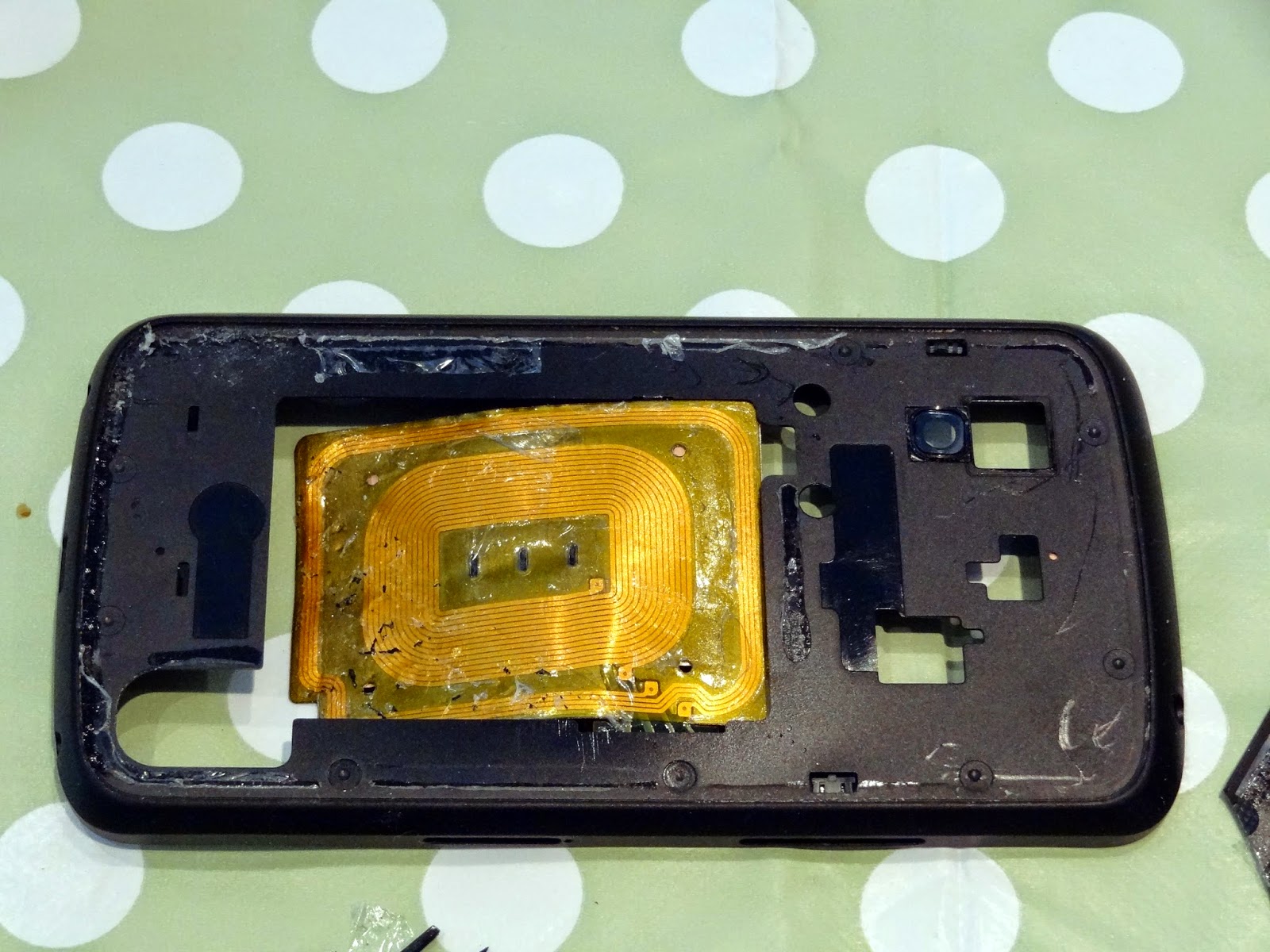 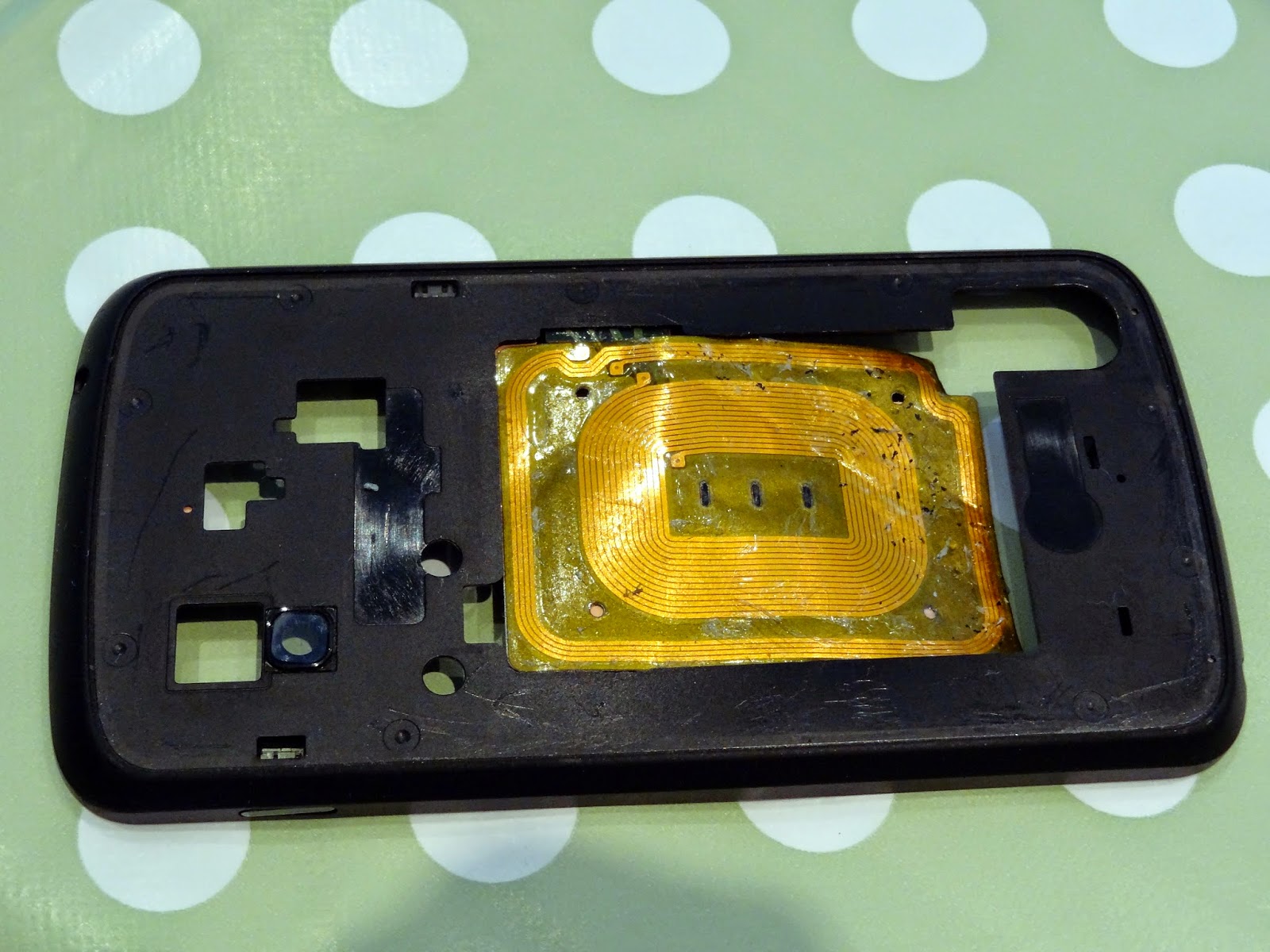 Before assembly, a compare and contrast was again interesting. The new glass panel did not include the speaker grill, or a small square rubber spacer around the rear-facing camera. They were relatively easy to transplant to the new glass panel however. 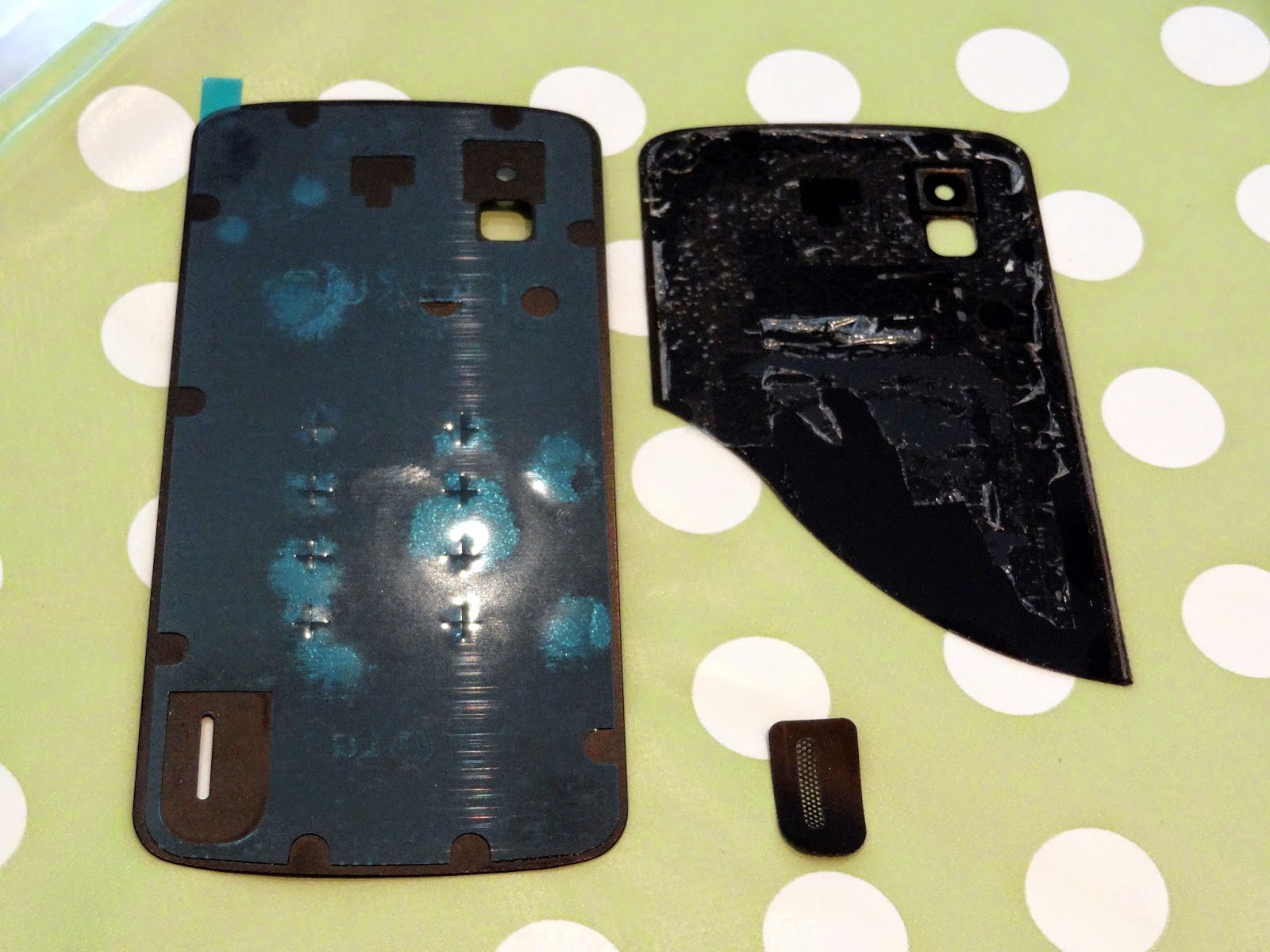 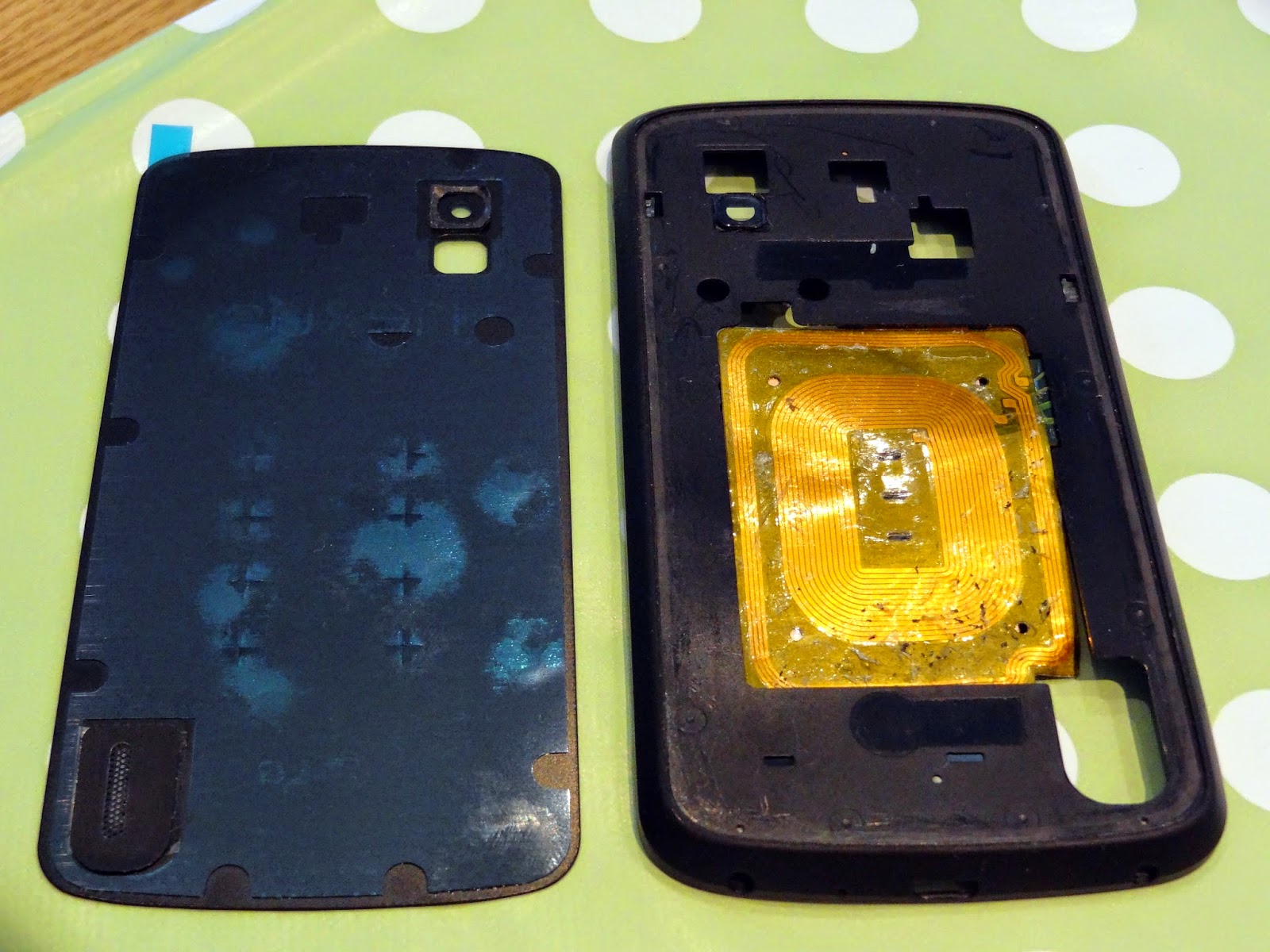 The last steps were the placement of the glass panel on the back cover case, and attaching the back cover to the device again. One more boot up confirmed that the back cover work had not broken anything, and the refurbishment was complete. 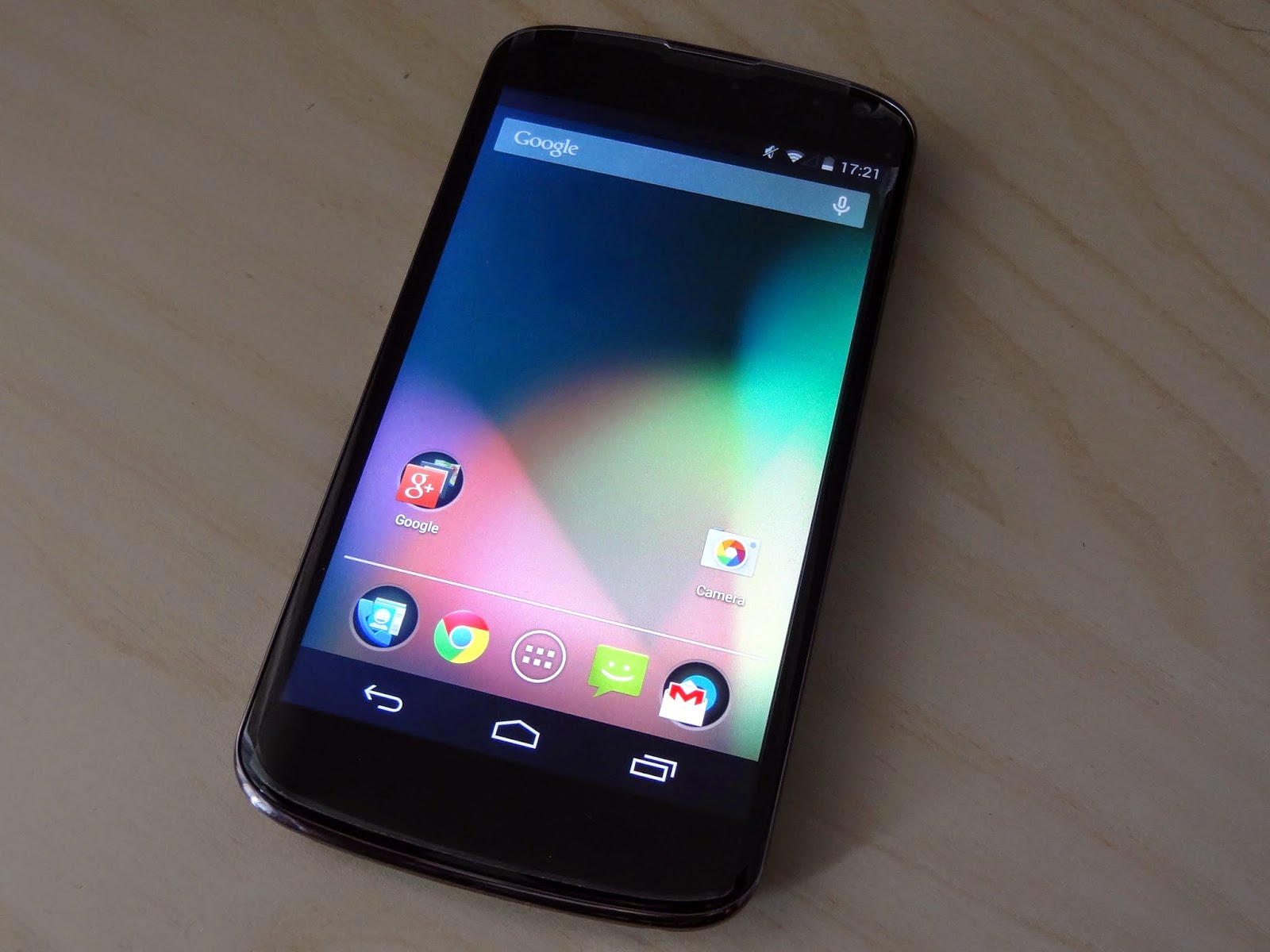 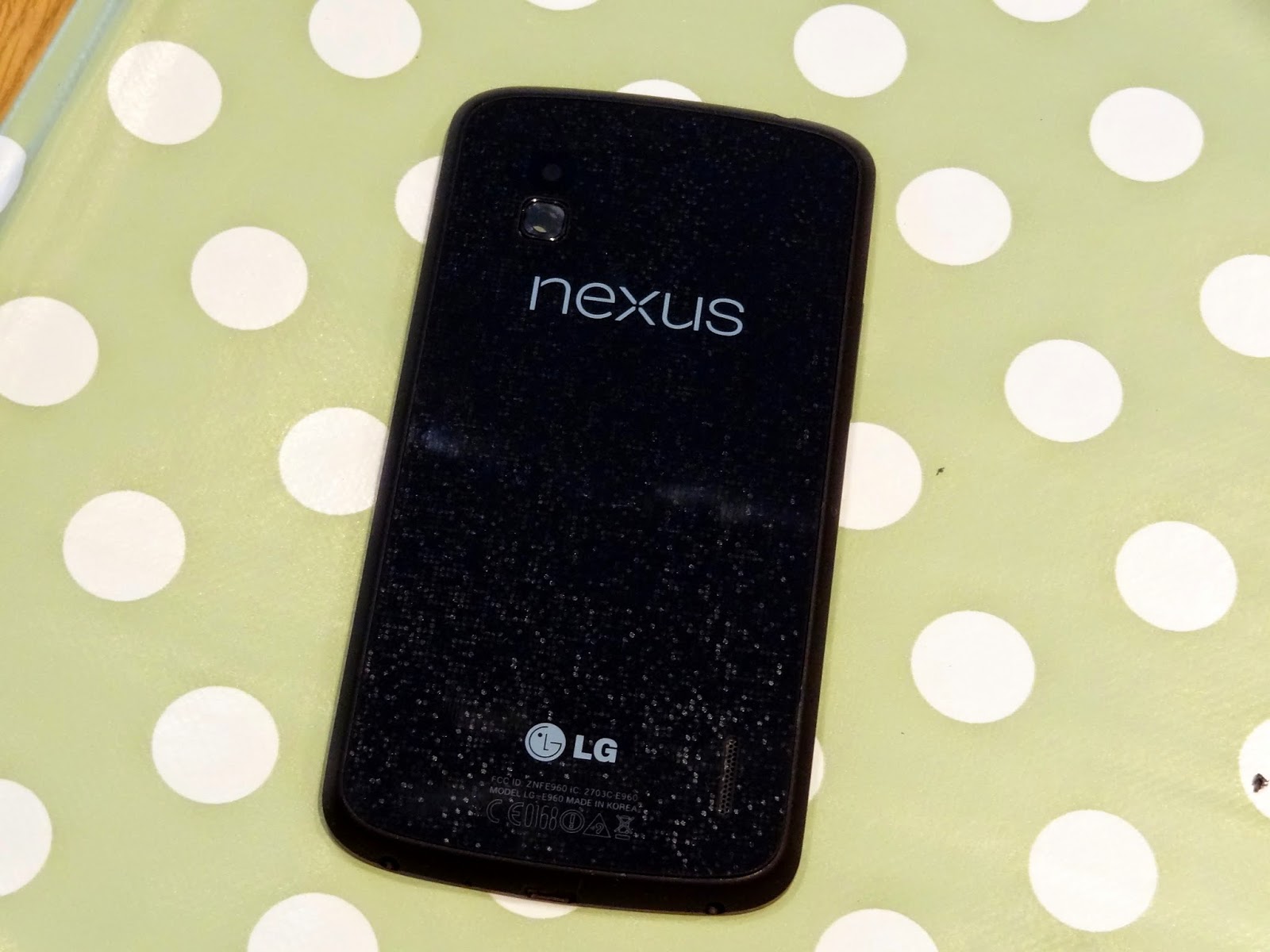 Whilst I've flashed more ROMs and rooted/jailbroken more phones than I'd care to mention, I've never attempted any hardware work on any smartphones, so I was chuffed that this one worked out well. Given this was a popular device, there were lots of helpful articles and videos on the Internet for reference, so I didn't have to do much brain work myself! I just has to ensure I wasn't too clumsy with the small components and delicate electronics! Having brought it back to life, I'm looking forward to using the Nexus 4 with its beefier specs compared to my Moto G, and hopefully it will tide me over until my next phone is announced and released! 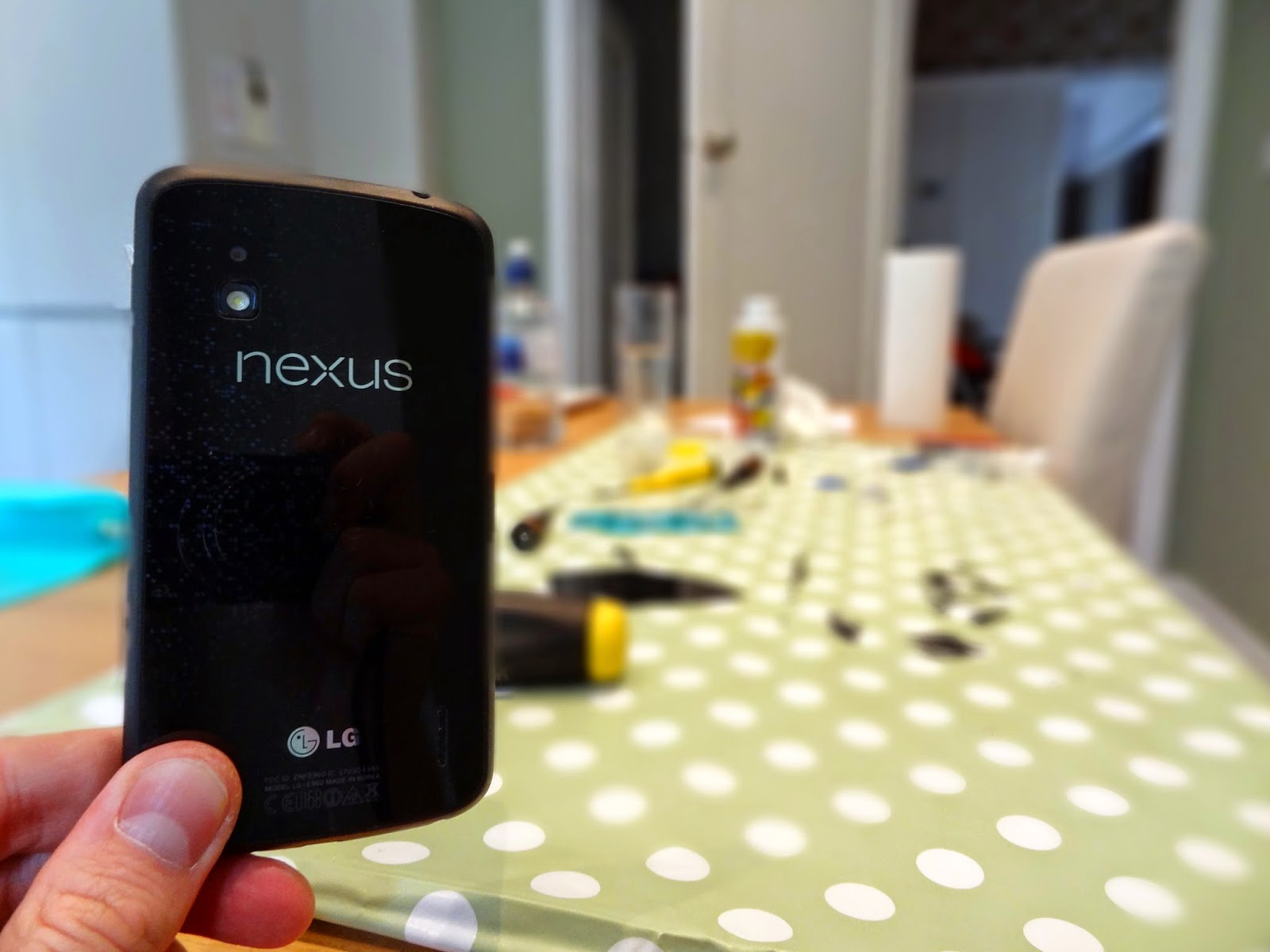 Posted by Jamoi Holland at 10:07 No comments: