Somehow, on 29th and 30th of October 2015, I managed to crack the screens of two phones in two successive days.


Unlucky? Careless? Either way, the devices had not been subject to any unusual conditions, heat or cold. It's not really surprising that they failed in the same way given they were made by the same manufacturer, but plenty of phone screens crack and leave the digitiser operational, giving you a 'grace period' to get a replacement sorted! I must also add that these phones between them have had around 3 years of daily use, but the digitisers still seem fragile in my opinion.

This all happened 4 days after I was a guest on the Phones Show Chat podcast, where I was complementing the Sony Compact range in general, and confirming I was really looking forward to the Z5 Compact! Timing...


A broken screen and knackered digitiser too: 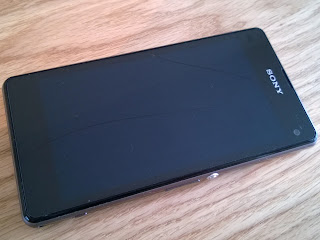 The screen and digitiser came as a single unit, but did not include the adhesive, so I ended up ordering this separately which set me back a few days: 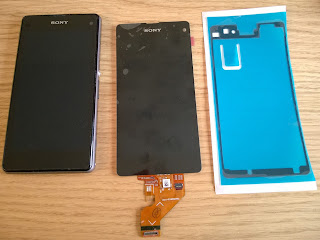 Removal of the old broken screen is as simple as applying heat (YouTube videos will say use a heat gun, I find a hair dryer works fine), then lifting the screen with plastic tools. The one supplied here looks suspiciously like a guitar plectrum: 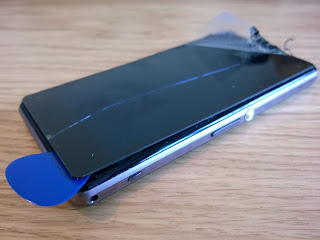 Here you can see Sony's factory-fitted screen protector getting in the way; peel this off then get on with removing the actual screen: 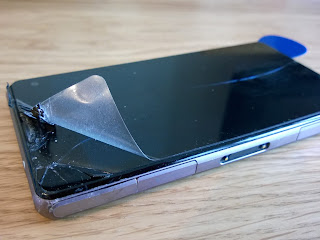 Here you can see the adhesive clinging on as the screen is lifted from the chassis: 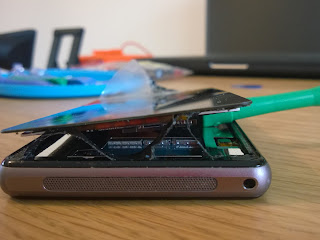 Having disconnected it, the old screen lies next to the chassis. It's best to remove and clean up as much of the old adhesive as possible, to ensure maximum effectiveness of the new assembly: 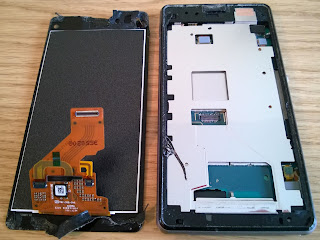 Attaching the new screen and doing a power-on and touch test before is always a good idea before fully sealing it to the phone...success: 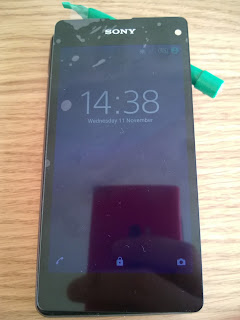 Having peeled away the film on one side of the adhesive, you can see where it will line-up inside the chassis, around the front-facing camera and earpiece: 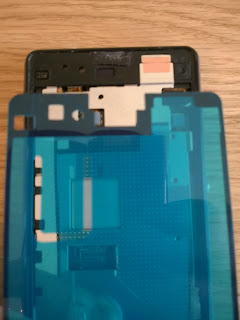 Adhesive applied to the chassis, now peel off the blue film, then connect and place the new screen into the chassis: 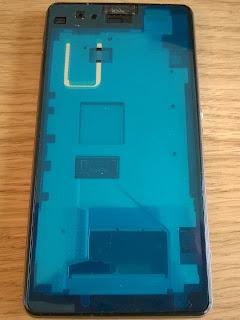 All done! There is one more step advised, which is to either place the device in a clamp, or between heavy books, to ensure the adhesive gets to work properly. I did the latter, overnight, and it has worked perfectly: 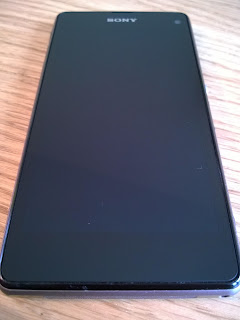 From a stint being lent to a less-then-careful family member, the back of the Z1 Compact was pretty knackered as well, so I'd also ordered a new back cover. You'll find straight replacements made of glass, but also polycarbonate plastic back options too, which I opted for due to cost and durability.

Here's the old beaten-up back cover: 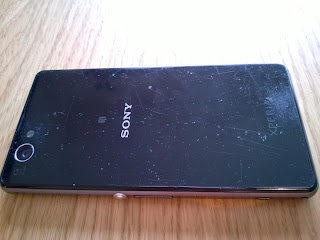 Same as the front of the device, heat up and pry the back cover from the chassis, then remove all the old adhesive and clean up the surfaces: 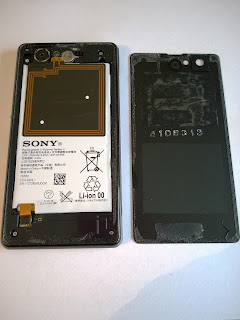 Then place the adhesive and the back cover onto the chassis. As with the front screen, some pressure from a clamp or heavy books for a few hours helps the adhesive get to work properly: 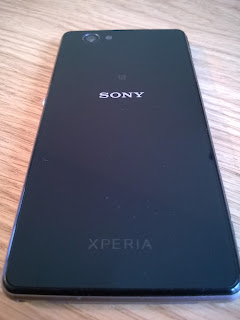 The total cost was £32, and 50 minutes of my own time to do the whole job, including the screen and the back cover. It was nowhere near as complex at the Nexus 4 or iPhone screen replacements; no screws, no removing components to gain access to remove the screen or back cover, just heating up to loosen old adhesive, and put new adhesive and new parts onto the chassis!


Photos taken with Nokia Lumia 930, a long-term loan courtesy of Steve Litchfield.
Posted by Jamoi Holland at 20:13 No comments:

Permissions, the system by which apps declare which hardware or special functions they wish to use, are getting a huge overhaul in the next version of Android, codenamed 'M'. Full details can be found here, with a slightly more palatable version here. This may or may not make developers more aware of the impact of the APIs they use, declare, and how users view, care or don't care about how apps use the hardware and special functions of their Android devices. Certainly a recent published vulnerability within Stagefright (an Android component) has given Android security the unwanted spotlight yet again, so both enterprise and home users alike may be getting more wary, we can only hope. I wrote about the need for a better security patching system for Android 15 months ago, and nothing has changed, it is still a problem given the Stagefright vulnerability.

However, with the current system of permissions declaration in play for a number of months yet before 'M' is released, and perhaps even longer given the slow roll-out of new versions of Android across manufacture and carrier variants, here's some examples of how permissions should and shouldn't be dealt with! Android users will know that in some app updates, developers add features which require them to use extra permissions, and these are displayed to the user at update time.

Here's an example from a voicemail app, which for some reason now wants extra permissions from no less than 9 different categories: 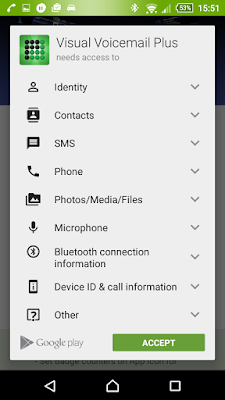 When developers publish app updates, they are encouraged to give proper release notes, explaining what has changed in the new version. Here is the accompanying text: 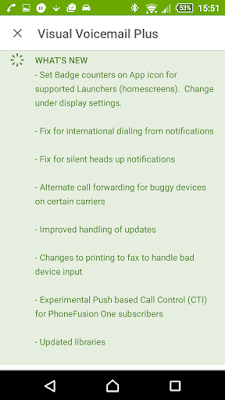 They seem like mainly fixes, improvements to existing features, and that's about it. So why all the new permissions? Why should I be happy, as a user, to suddenly allow this app to get much more of the content and functionality within my device? I contacted the developer, and the response below seems to suggest they were forced into declaring all these permissions just to add badge support for the app's icon in the various launchers.

"Unfortunately we had to add them in order to set the badge counters but they are ALL related to that and are specific to different launchers from various manufacturers and third parties."

This may or may not seem appropriate to you. most apps asking for further permissions are usually legitimate, and sometimes Android will put developers in a corner with certain APIs and permission. However, it would have been far better to include reference to this in the release notes.

Here is an altogether better example. This is a password management app, which itself was in the news for a breach last month, but takes a different approach. Here's the app update, and the new permissions it wants to declare: 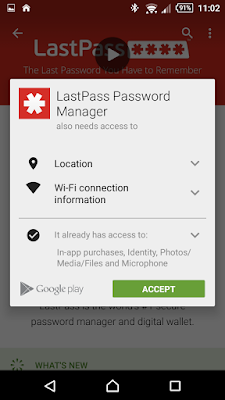 Not as many as the voicemail app, granted, but still permissions I might be interested in if the privacy of my location is very important to me. Let's see what the release notes say: 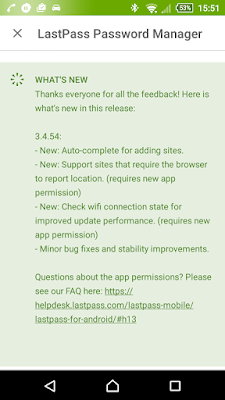 A full list of new features, with new permissions called out where they are needed. Much better, more transparent, and the users understands why they are required. Furthermore, for extra credit there is a link at the bottom which follows through to their website, where every single permission used by the app is described in detail, not just the new ones. 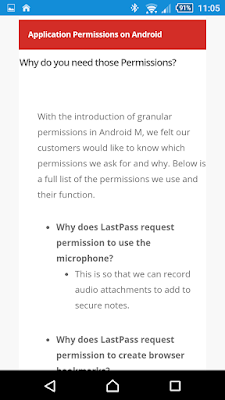 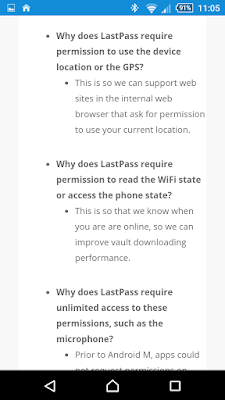 Now, if I didn't want the app to use the new permissions, I only have one choice; don't install the update. This becomes tricky if I want other new features of fixes, as a user I can't be granular. However, as previously described, the new version of Android, 'M', is due to make significant improvements to the granular control and to the user experience of being notified that apps are using certain hardware or software functions.

Whilst we're on the topic of app updates, a special mention has to go to Shifty Jelly for their Pocket Casts release notes. They do the job of describing new features and permissions required, but also include some great humour at the same time, always amusing! 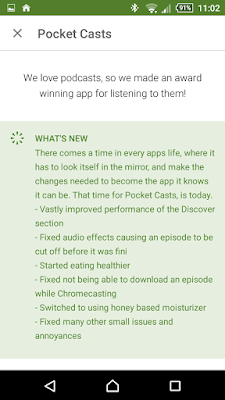 Posted by Jamoi Holland at 13:22 No comments: